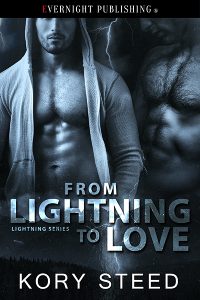 I’m excited and happy to report that From Lightning to Love was published last night on Evernight Publishing and Amazon.

I had a wonderful time this evening at the Facebook Release Party hosted by JJ King. There was great participation, and I made some new friends. Thanks, JJ, for including me.

I’ll be selecting the winners of my giveaways tomorrow evening. Stay tuned. 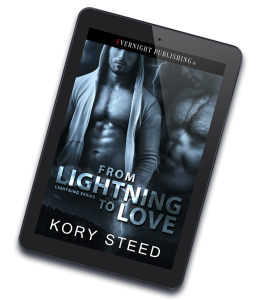 [Whispers, “I’ll be giving away free copies of From Lightning to Love (available March 24, 2017 – my release date) during my time slot.]

I look forward to seeing you there!

When he looked over at Aaron, it was obvious that he’d been disturbed by the shout from the unsettled look on his face, but it hadn’t been enough to wake him. He also noticed that the sheet and blanket were off him again, and he had another raging erection. He was so focused on Aaron’s penis, he didn’t realize that Aaron had woken up. Instinctively, Jason began to reach for it, but withdrew his hand almost immediately.

“You can touch it,” Aaron whispered.

Jason nearly jumped off the bed.

“No really, Jason, you can touch it. Please, you have my permission,” he said more clearly.

“I watched you sleep last night, Jason. You’re a beautiful man. I’d be lucky to find someone like you.”

“Aaron, I’m sorry.” Jason sat up and swung his legs over the side of the bed, turning away.

Jason stood up and walked towards the window. He wanted to run away.

Jason turned to face him, unaware that his own erection was straining against his jeans. He focused his gaze above Aaron’s head. Aaron focused on the bulge in Jason’s jeans.

“Can I be honest with you, Jason?”

“Jason, I can’t believe I’m saying this, but here goes. We have to be realistic about this. You’re a man. I’m a man. You’re gay. I’m gay. And for God knows how long, we’re gonna be confined to this cabin. It could be months.”

“Everything you’ve said is the truth,” Jason answered quietly, lowering his eyes to meet Aaron’s gaze.

“Jason, I can’t pretend to know what’s going on in your head, so I can only speak for myself, and please believe me when I say this. I have needs, Jason, physical needs. I always have, and I now find that I’m very attracted to you. I don’t think it’s just because of what you’ve done for me or that I think I owe you something. Well, to be honest, that may be part of it, sort of like hero worship or something, but it’s only a small part, and besides, if I’d have met you on the street before I met Nathan, I would’ve jumped your bones in a minute.”

Aaron tensed his mouth and closed his eyes momentarily. Jason noticed the look on Aaron’s face at the mention of Nathan’s name. When Aaron opened his eyes again, he looked directly into Jason’s eyes.

“Jason, I don’t think you know just how darn handsome you are. You have a powerful masculine musk, and I’m drawn to it. The first time I got a hard-on when you were washing me, it was purely physical. I couldn’t help it, but over the past few days, I’m finding myself wanting you more and more. I can’t believe I’m saying this, but I want you to make love to me. I’m a very good lover, Jason, though obviously,” Aaron waved his arm over his broken body, “I can’t back that up right now.”

“Well, say something, Jason. What are you feeling?”

Jason forced the words out. “Aaron, it would be wrong.”

“How can that be when I’m throwing myself at you right now!”